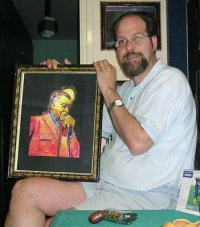 In town of Rijeka there are many painters, but only one paints portraits of great jazz, blues, soul and rock and roll personalities. His name is Bozidar Milinovic. Being a musician himself, a drum player since early teen age. Several years back he had to farewell with the music due to excused reasons. But not entirely. In the world of music, he remained as a portrait painter of legendary jazz, blues, soul and rock and roll musicians, as well as foreign and domestic Croatian jazzmen.

Carefuly observing his inspirative source - photographic portraits of personalities, Bozidar Milinovic studies characteristics, discerns physionomy of Duke Elington, Louis Armstrong, Ray Charles, Glenn Miller, Bosko Petrovic and others from the world of those musical genres. Using vigorous brush movements with steady control of chromatism he builds his composition that often posseses unique expression. His portrait works are firmly and clearly based on contrasts of lights and shadows, balanced out in their plasticity without much of decorative gentleness. Out of predominantly uniform chromatic backgrounds resurface individual and group(specially nice) portraits, en face or in profile with or without musical instruments, made in tempera, crayons or oil. I am of the opinion that in this theme Bozidar Milinovic has discovered a right dimension of his painted art creativity.

Bozidar Milinovic was born in 1960. in Rijeka, the largest port and maritime center of Croatia, where he lives and works in the children's hospital at Kantrida(coastal part of Rijeka). After he completed primary music school, already as a young teen he started showing great interest for music. He acquaints music during his early youth by listening to vinyl records that his father,a cargo ship officer brought from abroad. In the beginning he is attracted to rock and roll and twist, jazz music he starts listening a bit later and he remains its devotee until today. Bozidar is a great lover of jazz and a passionate jazzman. Jazz music in a way changes his lifestyle while he relaxes listening jazz. Because of his passionate love towards jazz, his friends and friends-painters nicknamed him "Mr Jazz". For many, "Mr Jazz" is a connoisseur who will always tell stories about that magical music called jazz. Since 1991. that same music, his inspiration, follows him while creating paintings. This word "JAZZ"is so intriguing, this music so sincere which surrounds him already for 20 and more years, and since 1991. jazz became an inspiration in his painted art creativity. In year of 1994. Bozidar starts his own independent exhibitions of his paintings, carefully realising each project that he assigns for himself. Until today Bozidar Milinovic accomplished 12 independent exhibitions that were seen by many visitors. By exhibiting his paintings, portraits of jazz musicians, he had the honour to meet some of the established Croatian jazz players from Rijeka like Darko Jurkovic - Charlie, Elvis Stanic Group, Goran Rukavina, Zlatko Barac and of course, the legend known throughout the world Bosko Petrovic from Zagreb. From 1995. till 1997., Bozidar exhibits his paintings in the atrium of hotel "Rotonda" in Novigrad-Cittanova, in Istria, (largest Croatian penninsula) during a summer jazz blues festival named "Heineken Music Nights". The exhibition "I Got Rhythm" was opened by Bosko Petrovic in 1997., of course in the hotel "Rotonda". Because of its particularities the exhibition leaves a pleasant trace between jazz and painting where Bozidar, for his friends known as "Mr. Jazz", has established his unique and easily recognisable style. Series of well visited exhibitions, such as "No thanks, I like jazz" (1998.), then "Essential All Stars" (1999.) and a slightly different exhibition called "Story from Costabella" (2000.), where the motifs from children hospital at Kantrida were exhibited. In the year of 2001. the author celebrated his 10th anniversary as an artist with the exhibition named "Friends & Legends" with guest appearances of of Zlatko Barac on saxophone and Luka Toman on electric guitar.

Here are few words of the critics : (to read more critics click on "my critics" button) "...Carefuly observing his inspirative source - photographic portraits of personalities, Bozidar Milinovic studies characteristics, discerns physionomy of Duke Elington, Louis Armstrong, Ray Charles, Glenn Miller, Bosko Petrovic and others from the world of those musical genres. Using vigorous brush movements with steady control of chromatism he builds his composition that often posseses unique expression. His portrait works are firmly and clearly based on contrasts of lights and shadows, balanced out in their plasticity without much of decorative gentleness..." (prof. Erna Toncinich, critic for painted and historic art) Bozidar Milinovic is an autodidakt (self-learned) painter who wanted to confirm his knowledge at the Public University of Rijeka in 1993. He enrolled the first semester the same year in class of Mr Branko Lenic, painted artworks teacher from Rijeka who gave a course in painting at the Public University. Mr Lenic completed Teacher's Faculty and he was the student of prof. Romolo Venucci, academic painter from Rijeka, from whom he had studied painted art. Bozidar, although self-learned, seeked the knowlegde base for his work that he had found from Mr Lenic. He had attended two semesters and was very active in learning and naturally he had gained success in making portraits. Let us not forget that Mr Jazz is predominantly a portrait painter. When Mr Lenic saw some of his works, made with graphite and charcoal pencil he was pleasantly surprised and he directed his student and painter in a way he found appropriate for him. During these two semesters besides making portraits, Bozidar had painted, occasionally, together with other students, motifs of other kinds . Supported with the knowledge he received from Mr Lenic, Bozidar had already in 1994. started with his first independent exhibition of portraits of rock and roll idols, and already in 1995. he portraited musicians from the world of jazz. Bozidar Milinovic, up to now had 12 independent exhibitions and several presentations on national and local television. Bozidar i.e. "Mr. Jazz", besides being a well known painter from Rijeka specialised for making portraits of personalities from the world of jazz, he also paints motifs of mediterranean sceneries, daily life scenes, portraits of common people, acts..., all that using various techniques, from tempera, charcoal pencil, oil on wood, oil on canvas as well as combined techniques. All his existing works that were presented within his independent exhibitions were from his huge cycle "On the Road", approximately 250 works of various techniques on different materials. In 2001. his exhibition named "Friends & Legends" closes his huge cycle named "On the Road", and already in 2003. Milinovic starts a new cycle under the name "Mix & Fusion". Bozidar Milinovic is also a musician who plays drums, occasionally doing this today too.